Adaptations of Arthurian works from other media

While the majority of Arthurian comics draw directly from medieval sources, a few are adaptations of more recent works in the media of film, television, prose fiction, and opera. As will be obvious from the notes below, my information about most of these comics comes from secondary sources.

The Adventures of Sir Lancelot 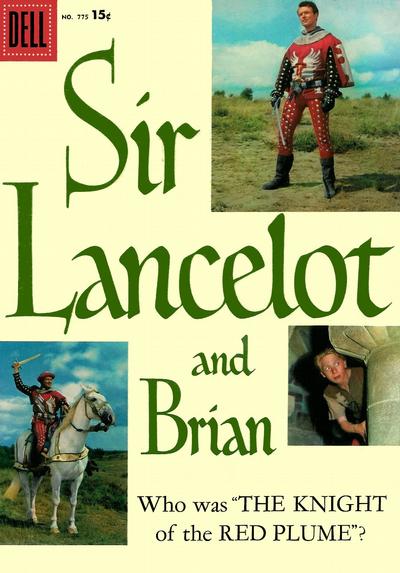 Based on the 1950's television series (produced by Sapphire Film Productions for the Incorporated Television Programme Company in Britain, and broadcast in the United States by NBC, 1956-1957) . Illustrated by John Buscema. Published by Dell Publishing Co. as Four Color #775, 1957, with the title "Sir Lancelot and Brian". 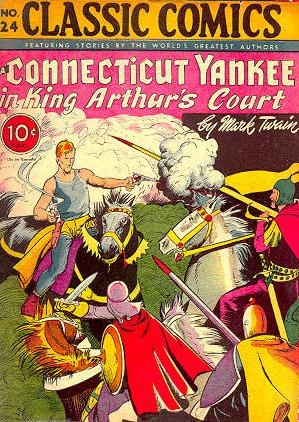 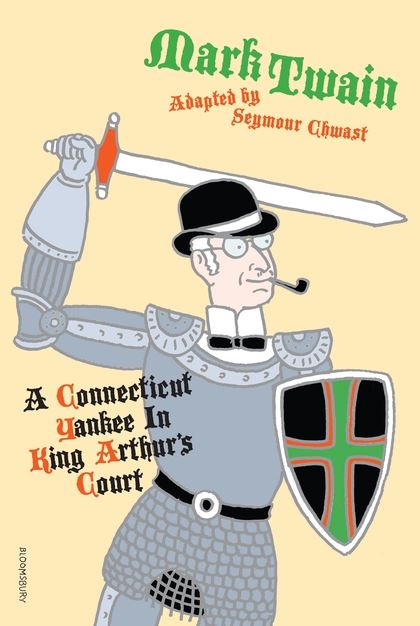 Mark Twain's familiar satirical story, which has also known numerous film adaptations, describes the adventures of a 19th century American transported to the days of Camelot. Like other issues in the Classics series, including the later "Knights of the Round Table", the Gilberton comic featured an abbreviated adaptation of a classic work of literature. This model was later imitated by King Features and Pendulum Press in their own "classics" lines. The Classic Comics version has seen numerous reprintings, the most recent (in America) being Acclaim Books' 1997 reformatted Classics Illustrated Study Guides: A Connecticut Yankee in King Arthur's Court.

The most recent adaptation, written and illustrated by the veteran graphic designer Seymour Chwast, is the longest and most faithful to Twain's original text, though Chwast's minimalistic, childlike approach to illustration and lettering may not be to all tastes.

(Sources: The Overstreet Comic Book Price Guide, "Camelot 3000 and Beyond."  Thanks to Steven M. Bergson for the e-mail tip on King Comics.)

Indiana Jones and the Last Crusade

The third movie adventure of Indiana Jones involves the archaeologist-adventurer and his father, Dr. Henry Jones, in a quest for the Holy Grail.. (Dark Horse Comics later produced an original comics sequel of sorts, Indiana Jones and the Spear of Destiny.)

King Arthur and the Knights of Justice

As in the TV cartoon, the Arthur and knights featured in this series are the members of a twentieth-century football team, the Knights, brought back in time by Merlin as stand-ins for the real King Arthur and his Knights, who have been captured and imprisoned by Lady Morgana.

Knights of the Round Table

The film on which this comic is based stars Robert Taylor as Lancelot and Ava Gardner as Guinevere, and is mostly notable as MGM's first CinemaScope production. The film storyline is ostensibly based on Malory's Le Morte D'Arthur. (Source: The Overstreet Comic Book Price Guide.)

Adapted from the 1963 Emblem film directed by Cornel Wilde. Published in 1963 by Dell Publishing Co. as an issue of Movie Classics.

Kevin J. Harty identifies this film (in which Wilde also starred as Lancelot) as the first Arthurian motion picture to deal forthrightly with Lancelot and Guinevere's adultery. It is uncertain whether the comics version (which I haven't seen) handled the theme similarly. The film was also released under the title The Sword of Lancelot. (Source: The Overstreet Comic Book Price Guide.)

The Last Defender of Camelot 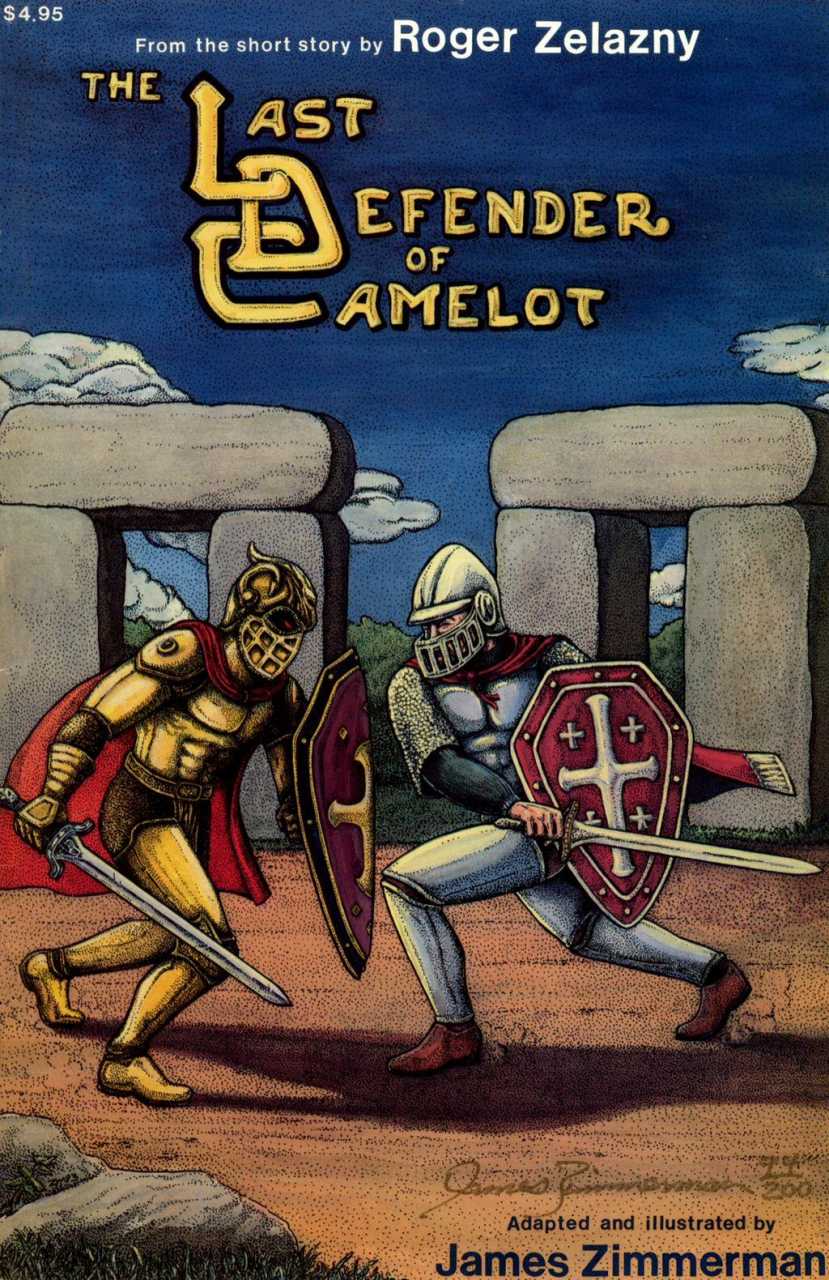 Adapted from the 1980 short story by Roger Zelazny by James B. Zimmerman. Published in one black & white issue by Zim Graphics, 1993.

Zelazny's story (which was also adapted for an episode of the 1980's version of the Twilight Zone televsion series) is a fantasy set in modern times in which a world-weary Lancelot forms an alliance with Morgan Le Fay against an awakened Merlin. Zimmerman's adaptation is faithful in intent, but amateurish in execution.

(Zelazny is also the author of the marginally-Arthurian The Guns of Avalon, the comics adaption of which is discussed below.) 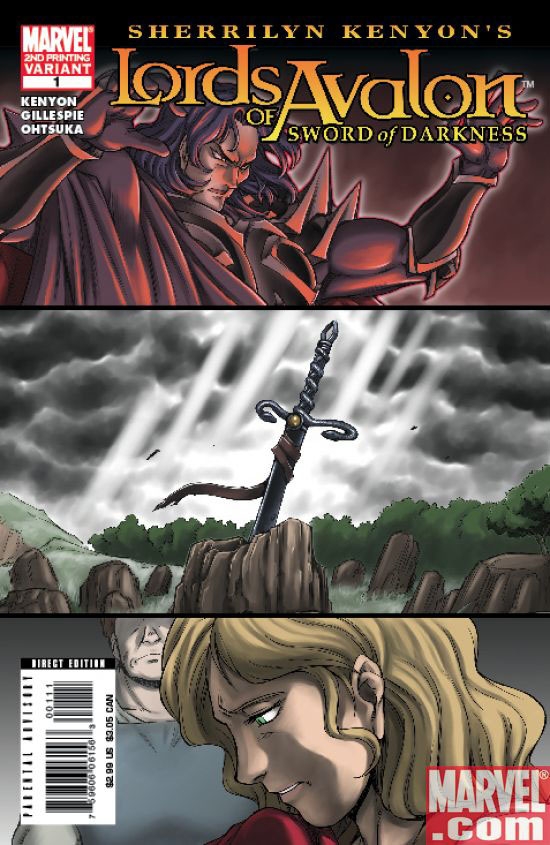 These miniseries adapt both of the author's "Lords of Avalon" romantic fantasy novels. The setting is a post-Arthurian world in which the evil Morgen, Queen of the Fey, rules Camelot. The remnants of Arthur's knights, led by the Penmerlin (Merlin's female successor),  have become the titular Lords of Avalon. In the first story, Morgen's consort Kerrigan kidnaps a peasant seamstress named Seren who is destined to be the mother of the next Penmerlin, with the intention of foiling the Lords of Avalon and enlarging his and Morgen's dominion; however, Kerrigan becomes romantically involved with his captive, which leads to his eventual violent break with the Fey Queen. The second story focuses on Varian, a Lord of Avalon who is the son of Lancelot and Morgen's ally Narishka, and Merewyn, a beautiful woman cursed by Narishka to appear as a grotesque hag (a motif that recalls the "Loathly Lady" of Arthurian tradition).

One unusual aspect of these stories is the characters' access to time travel, resulting in a matter-of-fact use of 21st century patterns of speech and cultural references.

The first two of three chapters were published in black & white in Star*Reach #8 and #10, 1977. First published in its entirety, and in color, in Parsifal (Star*Reach Productions, 1978). Reprinted in Star*Reach Classics #6 (Eclipse Comics, 1984) and in the trade paperback collection Opera.

One of the most accomplished and sophisticated Arthurian comics that has been produced to date, and perhaps the only comics treatment of the Grail Quest theme with an genuine religious sensibility. While only adapting the second (middle) act of Wagner's opera (which itself adapts Wolfram von Eschenbach's 13th century epic poem Parzival), the comic effectively encompasses both the preceding and succeeding events through flashbacks and foreshadowing and has the effect of a complete work. Russell's ornate illustration style, influenced by the Symbolist painters, is perfectly suited to the subject matter. This comic is the first of a series of opera adaptations that Russell would produce with various collaborators.

The film story tells of the adventures of Kayley, daughter of a late Knight of the Round Table, who joins with a young blind hermit, a two-headed dragon, and others to find the lost sword Excalibur and save Camelot from the renegade knight Ruber.

The film itself is loosely based on Vera Chapman's 1976 novel The King's Damosel.

The Sword in the Stone

The Overstreet Comic Book Price Guide lists three comics associated with the 1963 Walt Disney animated motion picture directed by Wolfgang Reitherman . March of Comics #258 (K.K. Publications/Western Publishing Co.) and Movie Comics : Sword in the Stone (Gold Key/Whitman, 1964) both appear to be adaptations of the film. Wart and the Wizard (Gold Key, 1964) apparently features characters from the film in an original story (and thus, of course, would not technically be an adaptation).

The film story tells how the unknown boy Wart is tutored by the wizard Merlyn and is ultimately revealed as the true king of Britain, Arthur. Disney's film is itself adapted from T. H. White's novel The Sword In The Stone, which in a revised form became the first part of White's The Once and Future King. The latter work was adapted into the musical play Camelot by Alan Jay Lerner and Frederick Loewe. (There was a film version of Camelot but no comics adaptation; "Can A Lot," a Mad magazine parody, is discussed below in Other Works.) 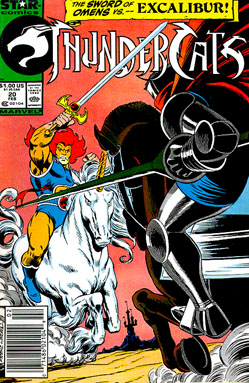 Adapted from a teleplay by Peter Lawrence. Written by Daryl Edelman. Published by Star Comics, an imprint of Marvel Comics, in Thundercats #20, 1988.

This story adapts an episode of the animated TV series in which the villainous Mumm-Ra assumes the guise of King Arthur and attempts to defeat the Thundercats with the power of Excalibur. Merlin and the Lady of the Lake appear. (Source: Camelot 3000 and Beyond.)

The Wizard of 4th Street

Hawke writes a series of novels set in a future in which Merlin has escaped from his long enchantment and initiated a second age of magic. A six-issue adaptation of the first novel, The Wizard of 4th Street, was planned, but only two installments were ever published. While Merlin, Morgan le Fay, Modred, and other traditional characters are featured in the novels, only Merlin appears (briefly, in the first issue) in the comics adaptation.

In the late 1960's, the satirical comics magazine Mad published a parody of the1967 film version of Lerner and Loewe's musical Camelot called "Can A Lot." The seven-page black and white story transposes the film's narrative to a modern to a business setting, featuring "Arthur King" as the president of the Excalibur Wax Fruit Company, and "Morbread" as a union representative. (Original publication information unknown; reprinted in Mad Special #9, 1972.)

Roger Zelazny's series of "Amber" fantasy novels may be considered marginally Arthurian, with character and place names that refer to the legend and suggest thematic linkages. DC Comics has published comics adaptations of the first two books in the cycle; the second of these, published in three issues in 1996 as Roger Zelazny's Amber: The Guns of Avalon, features an alternative world named Avalon as one of its settings, and a young knight named Lancelot du Lac appears as a minor character in the first issue.

Last updated 5/10/15. E-mail your comments and suggestions to the author, Alan Stewart .